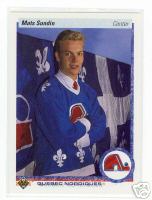 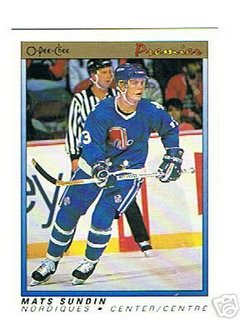 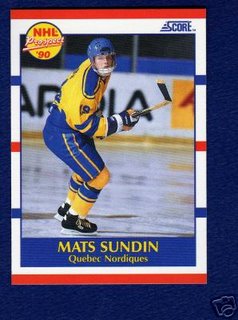 Mats Sundin's rookie season was with the Quebec Nordiques in 1990-91. He was the first player from Sweden to be drafted 1st overall. He made an immediate impact scoring 59 points in 80 games with the Nordiques. The skilled speedster got to play on a line with Joe Sakic in the early stages of his career.
In June 1994, Quebec traded Sundin, Garth Butcher, Todd Warriner, and a first rounder to Toronto for Wendel Clark, Sylvain Lefebvre, Landon Wilson, and a second round pick. Sundin would immediately play on the top line with Doug Gilmour and they had alot of chemistry and success. Once Gilmour was traded to New Jersey in February 1997, Sundin became the official leader of the Leafs.
At this point in his career, Mats has 1167 points in 1156 regular season games. He has 74 points in 83 playoff games. He is a consistent point-a-game player.
Alas, he has not led the Leafs to the promised land yet, proving Hodge's Non-Canadian Captain theory to be true. What is ultra frustrating to me is that the Leafs have only been to the semi-finals TWICE with Mats at the helm, but can't get over the hump. On a more positive note, the Leafs have only missed the playoffs twice under Mats' rule, and have pulled off some major upsets in the process.
Time is slowly running out on Sundin to lead the Leafs to the Finals, as he is now 35 years old. The new NHL will help his offensive numbers though, even though he is about past his prime.