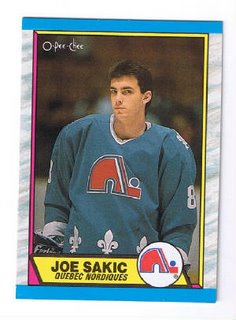 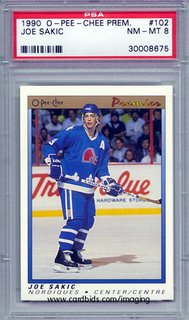 These are the the rookie and sophmore Joe Sakic Opee Chee cards. The rookie card isn't so flattering is it? He looks like a bully, but was anything but that.

Sakic has always been one of my faves. He is the perfect example of class (as in Gretzky-like class). He possesses one of the greatest wrist shots I've ever seen.
He a great playmaker and his skating style was/is so unique, you can always tell it's Joe when he rushes the puck up ice.

What I wouldn't do to see Sakic and Sundin play together one more time..