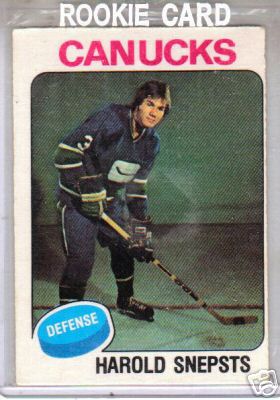 This week it's Canuck Legend defenceman Harold Snepsts. Geez, he doesn't look so mean and intimidating on his rookie card does he? Little did they know!
Harold played 20 seasons in the league with the Canucks, North Stars, Red Wings, and St. Louis Blues.
He is forever known for his intensity and passion for the game.
He played in the 1977 Allstar game, appeared in one Cup Final in 1982 with the Canucks, and two Conference finals with Detroit in the late 80's.
He was a gritty, brawling, yet steady defenceman. He didn't put up a lot of points, but did finish his career with 2009 PIM in 1033 games played. Click here for more Snepsts stats. Snepsts was inducted into the BC Hall of Fame in 2004.
I can still remember the fans at BC Place chanting "Haaaaaroooold! Haaaaaaroooold!" every time he laid someone out.