Share All sharing options for: ROENICK RUNNING HIS MOUTH AGAIN 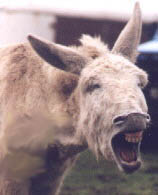 This time it's not as bad as his usual rantings. In regards to the Coyotes' lack of TV exposure Roenick said:
"Just having Gretzky as our owner, that's enough to get at least one of our games on (NBC)," Roenick tells the Arizona Republic. "I mean come on, throw a dog a bone. That, to me, is incredibly either disrespectful to Wayne or disrespectful to the city of Phoenix, a city that has supported their team."

"Yeah, Phoenix is not a big city, but we do have some big-name players on our team such as Jovanovski and Owen Nolan, myself, Shane Doan, and an up-and-comer like (Ladislav) Nagy. Obviously, some of these names, some people couldn't care less about, but a lot of it is because the NHL and the TV companies don't expose some of these players the way that they should."

"If they think that Phoenix is not a good market to watch, I think they're missing the boat."

According to TSN, Roenick also stated that it is a 'massive loss' to networks for not having Gretzky on television.
Do you agree with Roenick? I think he's overly honest and a jackass sometimes, perhaps being harsh talking about the 'names that no one cares about.'
It seems that Roenick is stirring the pot somewhat to get a reaction about the issue. But is it 'disrespectful to Gretzky' not to show many Coyotes games? I don't think so. He's not a player anymore. He's coaching a non-playoff team that really isn't going anywhere right now, in my opinion. And speaking of being disrespectful to Gretzky, how long do you think it will take for J.R. to start bad mouthing Gretzky or the team? I know he said he's turned a new leaf, but he's lying, dammit. He can't keep his mouth shut.
Nagy, Doan, Jovo, Nolan, and Roenick aren't big draws, and shouldn't be overrated.
I wonder how many people outside of Phoenix really want to watch more Coyotes games. I know I could care less. Do I really want to see Gretzky aging quickly behind a dismal team's bench?
The best draw about Phoenix this season could be internal combustion in the dressing room, and that's about it.