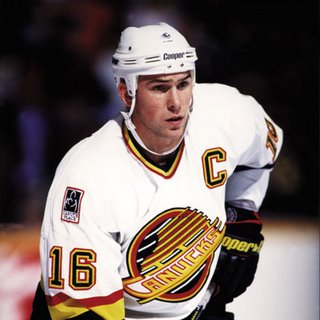 Reports out of Vancouver are saying that Trevor Linden will be back for another season. There was alot of speculation from fans that he would not return, and retire instead. But if you look at the Canucks' situation up front, they need all the help they can get.
Linden's offensive numbers are not so impressive anymore, but perhaps this season he'll play a larger role, with so much of their depth being 'diminished' up front.
Personally, I never was too much of a Linden fan, but he is the heart of this team. I would even recommend that he is given the 'C' this season, and that it is stripped from that gutless wonder Naslund. Probably won't happen.

***More news: Evgeni Malkin has disappeared from his team's training camp in Finland. Apparently he took his belongings and passport with him. Know where I'd look for Malkin right now? At the airport in Pittsburgh! heheh
Interesting developments for sure.