RECCHI TOOK THE CUP TO KAMLOOPS

Share All sharing options for: RECCHI TOOK THE CUP TO KAMLOOPS 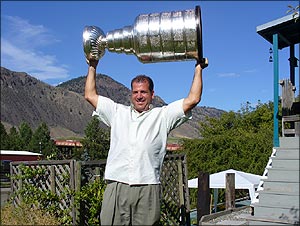 On August the 7th the Stanley Cup arrived in Recchi's hometown of Kamloops BC. This was a cherished celebration for Recchi. He said that he only got the Cup to himself for 4 hours in 1991 when the Penguins won it. This time around he got it for about 2 1/2 days!
I've never seen the Cup myself, but I wish I was in Kamloops that week as Recchi took it to a few bars and fans got to see it.
The Cup was also brought to the Dunes golf course in Kamloops for a charity game of golf. Recchi and Shane Doan (both former Kamloops Blazers) hosted the event. Even Bobby Orr made an appearance.
Check out the complete story at the Hockey Hall of Fame website, which has a Stanley Cup journal that tracks all of the players' time with the Cup.