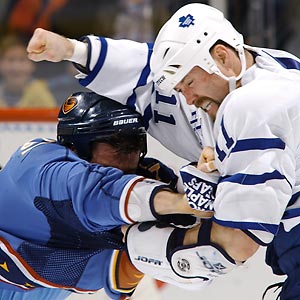 According to Sportsnet, it appears the Coyotes are about to sign UFA Owen Nolan to a 1-year contract. The deal could be worth $2 million maybe with incentives attached. Nolan has passed a physical test recently, and appears to be in good shape. He went down with a knee injury as a Leaf in 2004, and controversy ensued. The Leafs didn't want to pay Nolan's $5.6 million contract because they claimed the injury wasn't hockey-related.
I keep forgetting that Nolan is only 34 years old. If he stays healthy, he has alot to offer. He has 735 points and 1600 penalty minutes in 915 career games. He has never played a full season in the NHL due to injuries (interesting).
So this is a bit of a gamble for the Coyotes. Then again, so is Jeremy Roenick. Geez, the Coyotes have even more question marks on their roster now. But one thing is for sure, they are a LOT tougher than they were last season.
The Coyotes (without Nolan's contract) are sitting at about $40.5 million in salaries. So expect the $2 million contract for Nolan to be accurate.
Remember Nolan's performance at the 1997 All Star Game? Check it out.

**Canuck forward Ryan Kesler has turned down the Canucks' qualifying offer. Kesler wants a significant pay raise, and the Canucks can't afford it. Look for him to hold out this season, which is a shame.

**According to Alanah at Vancouver Canucks Op Ed, former Sabres D Rory Fitzpatrick could sign a contract with the Canucks as early as tomorrow following a medical exam. I know I know, cue Reality Check's Fitzpatrick jokes! Go visit Alanah's site for more details on this story.
Also, cue Hodge's creation of Nonis standing in front of the Salvation Army, as it completely applies to this!

**The Ducks have signed defenceman Ian Moran to a 1-year contract this afternoon. Moran will fill in for the soon to be parted Vitaly Vishnevski, and fill in the 5th or 6th slot on defence.
Moran is a great role guy, and is a rugged, reliable stay at home defenceman. The Ducks are really putting the pieces together, and will be a force this year.

**Defenceman Sean Hill will play for the Islanders this season. The former Panther agreed to a 1-year contract. The Isles D doesn't look too bad now, does it?