THE OILERS ARE NOT CINDERELLA

Share All sharing options for: THE OILERS ARE NOT CINDERELLA 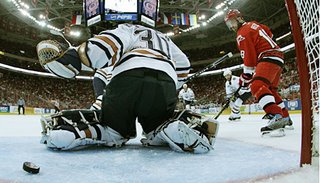 I have heard and read alot about the Oilers being last year's Cinderella team and that they have no chance of repeating that performance. To that I say: "Ca-Ca!"
I can see why people may think this way with the mass exodus of players out of Edmonton this offseason. But the real true loss was Pronger and perhaps Spacek, not Samsonov and Peca. Samsonov and Peca were replaced by Petr Sykora and Joffrey Lupul. This is an upgrade in almost every aspect, except Peca's leadership, experience, and penalty killing could be missed. Peca was inconsistent, even during the playoffs. He scored only occasionally, but his defensive game was good at least. The Oilers need more goals come playoff time at a more consistent level, they have that now. On paper, the Oilers actually have more depth up front than they did last season.
The goaltending tandem they have in Roloson and Markannen is worthy of envy. What was the last time their goaltending was this good? Roloson will play his first full season with the Oilers this year, and Markannen seems to have found his confidence in the Finals this past season.
The defence is the question mark. They have done nothing to address the losses of Pronger, Spacek, and Tarnstrom (who wasn't full time). But we got a good look at the up and comers in the playoffs. Marc-Andre Bergeron may have been inconsistent, but you could see his potential. Matt Greene is one tough S.O.B. and acts like Jovanovski when it comes to bonehead penalties, but aside from that his defensive play was impressive.
What I see happening here is another signing or trading for a #1 or #2 defenceman, and not a $7 million defenceman either. (Buffalo and Carolina already proved that you don't need that to succeed.) It looks as though the Oilers are currently sitting at the $34.5 million mark in salaries and have lots of room to maneuver. Of course some of this will go to Joffrey Lupul, who hasn't signed yet.
Rumors are circulating that the Oils are interested in UFA Brian Leetch. Once again, if Leetch could stay healthy and choose to come west, he would be a perfect fit for the Oilers' speed game, and would quarterback their powerplay. But this is only a huge possiblity for him to arrive there. Either way, I'm sure MacT will address the issue. I would assume sometime during the season if all fails on D.
The Oils aren't getting enough respect. This isn't the old NHL. They are not strapped for cash. The cap gives them the opportunity to be competitive every season. They aren't looking to squeeze into the playoffs this year, they are looking to finish higher to get home ice advantage. I wouldn't bet the house against this happening.