NO CONTRACT TALKS WITH DIPIETRO

Share All sharing options for: NO CONTRACT TALKS WITH DIPIETRO 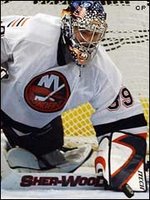 There are reports that the New York Islanders and goaltender Rick Dipietro have not even opened discussions about a contract for Dipietro yet. There are also reports that this is because Charles Wang is on vacation.
They have about 2 weeks to make a deal because apparently Wang has a policy that states that the Islanders will not sign any of their restricted free agents after training camp starts.
The Islanders have about $7 million left to spare under the salary cap, and only have 3 players left to sign: LW Sean Bergenheim, D Denis Grebeshkoz, and Dipietro. 18 players are already signed.
Last September, then GM Mike Milbury was planning on signing Dipietro to a 15-year, $60 million contract, but that did not pan out, and Dipietro got a 1-year deal at $2.5 million. (talk about overconfidence in your young goalie!)
This time around I'm sure Dipietro will be looking at about $4-5 million. I would assume that they will get this deal done by training camp.