LINDEN WILL NEED TO TAKE A LARGE CUT / MORE NEWS

Share All sharing options for: LINDEN WILL NEED TO TAKE A LARGE CUT / MORE NEWS 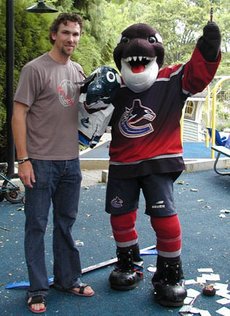 Trevor Linden has not yet been signed and may be one of Dave Nonis' last priorities this offseason. That's not to say he won't sign, but the Canucks' GM has yet to sign Ryan Kesler and Lukas Krajicek as well, among others. **NEWS FLASH- THE CANUCKS HAVE JUST SIGNED LUKAS KRACIJEK TO A 1-YEAR DEAL. Tip to Stick in Rink for this revelation.** The Canucks cap expenditures so far are at about $39 million. Linden made $1.52 million last season and will recieve a lot less this year, reports the Vancouver Sun. That means probably about $800,000 or even less. There really isn't that much room left under the cap, and Linden had only had 7 goals and 9 assists last season. Linden is a horse though. He'd probably play for $400,000 or less because he loves it here so much.
Linden told the Sun: "I look forward to coming back. I feel I can make a difference and that's the only reason I'm here. We've made a lot of changes and we have a lot of work ahead of us, but that's exciting."
As well he said: "There is no question, though, that from a mental standpoint, I'm in a much better state and probably physically much better as well."
Is Linden good for at least one more season? What would you pay him at this point? If he is going to take up cap space he'll need to improve and erase last season from his mind completely. I say he can't have a worse season than last year, but it could be getting time for Nonis to have a few more two way contracts in the lineup to ease the cap headache before comitting to Linden just yet.

** In other news, the Hurricanes have signed D Dave Tannabe to a 1-year $900,00 deal. This is Tannabe's second stint with the Canes and is met with mixed emotions from what I've seen.
Spector's Trade Rumors, a great rumor site, reports that the Canes may also sign UFA Brad Isbister in the next little while, probably to replace the injured Corey Stillman.

**TSN reports that Tim Connolly is still feeling effects of his concussion suffered May 8th and will miss training camp. This could mean the end of the road is nearing for the 25 year old, and that really is a shame.