LEETCH STILL HAS A LOT TO OFFER

Share All sharing options for: LEETCH STILL HAS A LOT TO OFFER 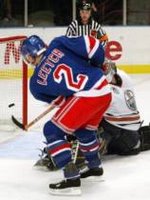 Brian Leetch, 38, has a great resume- a Stanley Cup, Conn Smyth trophy, Calder trophy, and 2 Norris trophies. He has 1028 points in 1205 regular seasons, and an even more impressive 97 points in 95 career playoff games.
All this at a $4 million salary. So what gives? Why is he still available as an unrestricted free agent this late in the summer?
One reason is his horrible outing last season in Boston. Leetch had his worst offensive season since his rookie season in 1987/88. Alot of this can be attributed to the amount of injuries he sustained with the Bruins. He had a groin injury in January, which he re-aggravated, a head injury from Daniel Briere's stick,in April, and a strained MCL last November. His health track record is slowly decaying.
Leetch may not be the player he once was, but he isn't that far off either. I'm sure his age worries teams as well, but Leetch is not a slow old fart. He is plenty capable of rushing the puck up ice quickly and effectively. He's a hell of a passer and shooter as well, and can quarterback a powerplay.
And what about leadership? Leetch is not known to be a loud guy off the ice, but on the ice it's a different story. Leaf defenceman Bryan Mccabe has openly stated that Leetch taught him a great deal about playing the point on the power play when they briefly played together in T.O. And look how McCabe's numbers soared the next season, even without Leetch there.
There are reports out of Boston that the Bruins may still sign Leetch after they sign all of their restricted free agents. But at 4 million? They won't have enough room under the cap after they sign their free agents. The same applies to the Rangers, who may also be interested. Leetch's options at $4 million are very limited. Odds are he'll play somewhere in the East for $2 million or less, and incentives could be tied to the deal. I'm sure he will not go West, unless he absolutely HAS TO.
What is really unfortunate is that Leetch's career could be over at 38 years old, with plenty left in the tank. I guess we'll see how much of a cut he is willing to take to stick around.