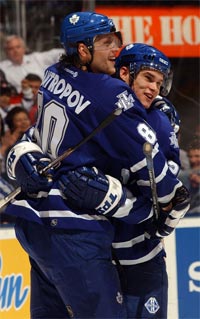 I have mentioned my worries about Raycroft being a go - to guy in net this year. But a lot of the Leafs' success will also depend on the maturation of Alexei Ponikarovsky and Nik Antropov.
While Ponikarovsky broke the 20 goal barrier last season, Antropov did not, and never has. (He was also injured.) Antropov makes just over $1 million, and Ponikarovksy makes a piddly $725,000.
Both players are 26 years old, and have had time playing on the Leafs' top line. This year they could play there as well. They, especially Antropov, need to step it up NOW and contribute on a more regular basis, or else I'm going to develop the same hatred for them that I had for Jonas Hoglund and Robert Reichel. (oh please no!!!)
The Leafs don't have much scoring depth up front to support these two putting out sucky performances. Jeff O'Neil is floundering in T.O., and Peca pobably won't contribute much during the regular season offensively. Tucker had a career year last season, but is inconsistent. McCabe got his huge raise, so anyone want to bet he stinks it up this year? Maybe Wellwood will emerge.
It's tough to predict the fate of the Leafs this year. There are too many question marks. They probably won't make the playoffs once again, unless a miracle happens. (Yes I am a realist) A part of that miracle may be what tricks new coach Paul Maurice has up his sleeve! I hope he teaches them how to win 2-1 games, meaning tight defence, meaning Dallas-like defence!