Share All sharing options for: JP DUMONT IS GOING TO MUSIC CITY 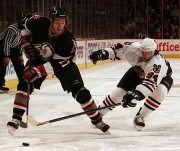 It appears that Sabres castaway JP Dumont has signed a 2 year deal worth $2.25 million per season. TSN reports that it should officially be announced by the Preds this afternoon.
Thank the Lord that the Dumont saga is over. It's amazing how much some people care about where the overpriced Dumont is going, but there really isn't much else going on in the league as far as news goes.
Dumont will be a good addition for the Preds, and will probably play on their second line with Hartnell and Legwand.
The Preds still haven't signed defenceman Dan Hamhuis yet, but will probably get this deal done within 2 weeks. The Tennessean is reporting that there isn't alot of talking on that front recently.
Nashville is sitting at about $34 million in salaries (including Dumont) with alot of room to spare.