HOMETOWN BOY NOT SIGNED YET

Share All sharing options for: HOMETOWN BOY NOT SIGNED YET 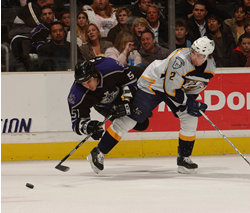 Smithers B.C's very own Dan Hamhuis has not been resigned by the Nashville Predators yet. Hamhuis, who had 26 points and a -12 in 80 games in his rookie season, improved dramatically as a sophmore last season with 38 points and a +11 in 82 games.
For the past 2 seasons especially, the Preds have been very deep on defence, and Dan has
still played in the top 4 in Nashville. Danil Markov was let go this offseason. So we know the Preds are comitted to Hamhuis, I just wonder how far apart they are in negotiations. I would assume that Dan will get between $2.0 - 2.5 million for a multi-year deal. The Preds are sitting at about $32 million in salaries so far.
I find it intriguing how Smithers residents are loyal to Hamhuis. In turn we root for the Predators as well, especially in the playoffs when/if the Canucks don't make it, and sometimes even when they do make it. The town buzzes whenever he does something out of the ordinary, like the 4 point game, a huge hit, and the deke job Lang put on him in the playoffs (ouch). He is becoming an icon in our community and we are proud of him no matter what he does. He is such a down-to-earth guy as well.
I got to hang out with him once as I was really good friends with his uncle Jerry. The three of us went on a canoe expedition down the Nadina River (east of Houston B.C.) This was just before Dan's tryouts for the Preds. At one point we all bailed out of the canoe before a log jam. Dan had the rope (that was tied to an S - hook on the front of the canoe) wrapped around his hand trying to prevent the water- filled canoe from going under the logs. I think Jerry and I were catching our footing in the creek floor at the time, as well looking for Jerry's dog who had gone under the log jam ahead of us. All of a sudden we hear Dan screaming in pain at the top of his lungs...somehow he had snagged his index finger in the hook attached to the front of the canoe! The full weight of the water-filled canoe was pulling on his finger! I couldn't get my footing to help but Jerry did, as Dan yanked his finger out of the hook. Dan collected himself on the creek bank as his finger bled. Jerry and I looked at eachother, both thinking "Oh shit! His finger is broken and he has to tryout for the Predators in a week!"
Well, it was probably just a bad sprain, because his finger was fine for the tryouts, and he made the team! (The dog popped out on the other side of the log jam eventually as well!)
A great story he told us on the way home was about when he appeared on Coach's Corner during Game 2 of the Devils/Avs Finals as the prospects usually do. He didn't like Cherry! He also said that Lou Lamoriello wouldn't let any of the Devils see the prospects before the 2nd period. However, Joe Sakic came out to see them just before the period started. Dan was amazed by the amount of class that Sakic showed, especially during a Finals game. Good stuff.