HARRY SINDEN TO PROBABLY CALL IT QUITS ON WEDNESDAY MORNING

Share All sharing options for: HARRY SINDEN TO PROBABLY CALL IT QUITS ON WEDNESDAY MORNING 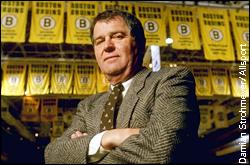 A press conference will be held Wednesdeay morning at 8 AM Pacific. This will probably end a Hall of Fame career for Sinden, who is currently the president of the Bruins.
He has a hell of a resume.
-A Stanley Cup win in Boston in 69/70 as a coach. Pretty easy with Espo and Orr, huh?
-Coached Team Canada to the Summit Series victory in 1972, even after alot of Canada had lost faith in him and the team.
-inducted into the Hall of Fame in 1983 in the builder's category.
-As TSN mentions, Sinden was the first GM to walk away from a player who had won an arbitration award (1999, Dimitri Kristich.) And a host of GMs followed suit!
-Sinden was coach and GM of the Bruins for almost 30 years.
He always managed to keep the Bruins competitive, but was also controversial as well. He was well known for being stingy, and unwilling to open his pocketbook to talent. I'm sure alot of Bruins fans will rejoice with this announcement. Me, I admire his accomplishments, and also look forward to seeing what a change in Bruins management will do for the team.