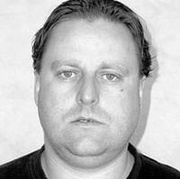 The agent that murder-conspirator and former NHL'er Mike Danton targetted has been charged with 12 counts of sexual exploitation and 1 count of assault. As TSN reports, David Frost faces charges from incidents involving 4 boys and 3 girls aged 14 - 16 between the years 1995 and 2001.
This sorry-assed son of a bitch doesn't only need jail time, he needs to arrive at the prison with all of his genitalia cut off and maybe both of his hands as well. Hell, just hand out the death sentence. I don't want to start a political debate, but this issue angers me to no end because these types of criminals don't change their sexual preferences even after jail sentences. The jail sentences are too short as well. Then they are inserted back into society. BS I say.