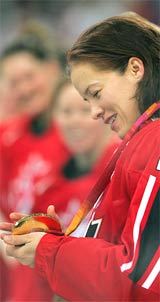 Campbell was pondering this decision for a while, but has made it official. I know women's hockey doesn't get as much exposure, so some of Cassie's accomplishments are probably not realized by many people. I think TSN summed it up very well when they mentioned:

The 32-year-old from Brampton, Ont., is the only Canadian hockey player, male or female, to captain a national team to two Olympic gold medals, which she did this year in Turin, Italy, and in 2002 in Salt Lake City.

She has represented Canada in seven world championships and three Olympic Games, winning six world titles and two Olympic gold medals. She has 32 goals and 68 assists in 157 career games for the national team.

Campbell was the captain of Team Canada since 2001.
She will continue her career in broadcasting as a women's hockey analyst for TSN, and as well as be an advocate for women's hockey in Canada, as she always has been.
I never was much of a fan of women's hockey, until I watched Team Canada win gold in 2002 at Salt Lake City. Despite getting jobbed by the non- Canadian referees with continuous phantom calls,( which was one of the most obsene things I've ever seen in hockey), the women held on to beat the Americans. This victory inspired the Canadian Men's Team to win gold as well.
Well done, Cassie. I'm sure all Canadians are proud of what you accomplished!