BRENDAN MORRISON AND THE CANUCKS WERE FRUSTRATED LAST SEASON

Share All sharing options for: BRENDAN MORRISON AND THE CANUCKS WERE FRUSTRATED LAST SEASON 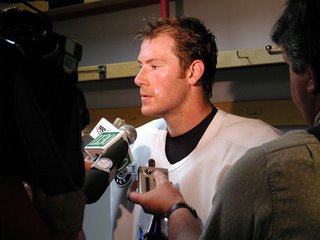 I just watched TSN's interview with a few Canucks from last week, and Brendan Morrison's comments stood out the most. You could detect some frustration in his voice over last season. He said he is excited about the upcoming season, and that it was frustrating playing on the top line last year because they all wanted the puck all the time, and that "there wasn't enough puck to go around." That is quite a statement. There must have been alot of love lost on that line in what appears to be between Morrison and the two 'best friends' Naslund and Bertuzzi. Of course, Morrison was playing with a hip injury (which has been corrected this summer), but you have to think the lack of chemistry was more of the issue.
Naslund thinks that the Canucks are hungry this season. He also pointed out the obvious that he 'tremendously benefitted from playing with Bertuzzi.' He said he has alot to prove now. The truth is, Naslund may not break the 80-90 point barrier without a player of Bertuzzi's skill on his line. He never has. Matt Cooke looks to move up to the top line as he had done in Bertuzzi's absence, but he's no Bert.
During the same interviews with TSN, Cooke stated that Morrison and Naslund can "have all the glory they want", and that he'll just go and get the puck. That in itself (to me) doesn't quite add up as far as the team chemistry goes. It still suggests a touch of conflict when you combine that with Morrison's comments.
Either way, the Canucks will need more balanced scoring on all four lines this year, as that seems to be the recipe for success. As much as Canuck fans don't want to hear it, Naslund will need to put up alot of points and properly lead this team to justify his $6 million salary, or else his days are numbered. I would assume there will be some growing pains in October, but hopefully they can gel as a team quickly, and move on from last year's failure.