Share All sharing options for: BEST PICTURE FROM A STANLEY CUP TOUR 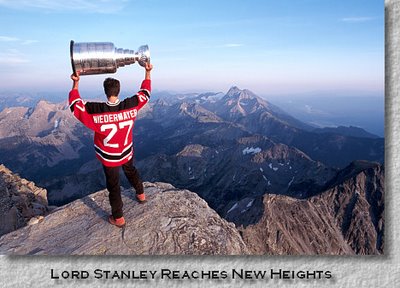 So I found this awesome picture at angelfire.com and I'm not sure of it's truthful origin. But this is the best picture I've seen with an NHL player spending time with Stanley. Scott Niedermayer would have brought the Cup to Cranbrook anyway I'm sure, but it was reported he also did it to boost the morale of firefighters who were fighting a nearby forest fire. Good stuff.
The residents of Cranbrook see their fair share of Cup visits, especially with the likes of Scott Niedermayer, Steve Yzerman, John Klemm, and Brad Lukowich winning the trophy in recent years.
But since I'm a hiker who appreciates these views, and love living in the beautiful province of British Columbia, this is my favorite celebratory Stanley Cup picture yet!