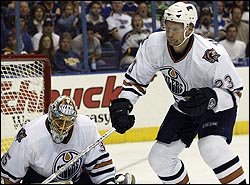 Of course, it wasn't much of a suprise that Dick Tarnstrom was going to leave, as he was an unrestricted free agent. However there were some hopes that he would sign with the Oilers again nevertheless, as he did fairly well in the playoffs.
Tarnstrom has signed a contract with Lugano of the Swiss Elite League.
Apparently Tarnstrom was looking for too much money this coming season, and no teams were biting. It remains to be seen how much he'll make in the Swiss League.
The Oilers now have lost key veterans from their defensive lineup, but they remain confident in their D as they have two new guns named Ladislav Smid and Jan Hejda. Of course Mactavish and Lowe will say they are confident, but you just can't lose guys like Pronger, Spacek, and perhaps Tarnstrom without losing a little sleep at night.
/>

**Hurricanes C Cory Stillman will not play hockey for the next 3-4 months as he is recovering from shoulder surgery. This is a big blow to the Canes' offence, but look for newly acquired Scott Walker to play on the #2 line in Stillman's absence

**The Canucks have officially signed D Rory Fitzpatrick to a contract today. This will give them a bit of room to play on defence if one of the younger D don't pan out, namely Luc Bourdon or Kevin Bieksa, or if injuries occur.