ALL RIGHT! IT LOOKS LIKE EVGENI MALKIN IS COMING! 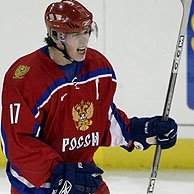 The Russian Federation was given this past Monday as a deadline to agree to the player transfer agreement, but they have not done so. As a result, there may not be an agreement this year.
So, Russian players who are under contract in the Russian Hockey Federation need to secure their own release, Malkin included, and then they can play in the NHL.
Malkin's agent Don Meehan has stated today that they will begin contract negotiations with the Pittsburgh Penguins immediately, and that it is a "top priority." Malkin was selected 2nd overall by the Penguins in the 2004 NHL Entry Draft. Last season with the Metallburg Magnitogorsk, Malkin had 47 points in 46 games. He is considered the best player in the world outside of the NHL right now. He will make an immediate impact with the Penguins if he plays in the NHL this year, and take a big run at the Calder Trophy.
I first saw Malkin play at the Turin Olympics and I was hugely impressed. He plays pretty tough for his 6 foot 3 185 pound frame. He'll only get bigger and tougher this season. But he is kind of cocky though, he plays with a chip on his shoulder. I wonder how well Crosby and Malkin will click.