Share All sharing options for: 5 TRULY WACKY THINGS ABOUT ZANSTORM 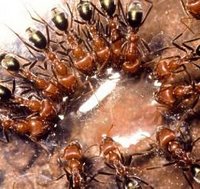 After reading everyone's top 5's, I realized that my list wasn't wacky enough, and that some people really bared their souls. So I figure I should take a stab at this once again!
#1- I have a phobia about ANTS! This is kind of pathetic, as the ants in Canada only pinch when disturbed (unlike fire ants of the south!) But my brother, sisters, and I were jumping over a huge ant pile when we were kids. Fun right? Well after about my 10th time of jumping over, I tripped on a root that had become exposed and fell face-first into the pile of pissed ants! For about one hour after that I was running home, peeling my clothes off, and brushing all of these 'pinching' ants off my skin! Yeesh, it still gives me the creeps.
This led to us burning every anthill we saw in our neighborhood, and an anthill fire that got way out of control as soon as the wind caught it! Another story! 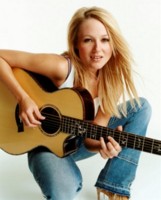 #2- I had a pathetic crush on Jewel Kilcher when I was in my 20's. I liked her voice and musicianship and vocally proclaimed that to everyone. My friend said he had met her aunt in Alaska, and I was jealous about that.
When Jewel finally came to Vancouver touring for her "This Way" album, I made a 14 hour roadtrip to Vancouver by myself to go and see her at the Queen Elizabeth Theatre. No regrets though, she was amazing live! It's just in hindsight I was acting like I was 16.

#3- I've swam in some cold lakes in early spring before, but nothing compared to what the two of us did in the pic to the left. That is Bear Glacier, on the way to Alaska. The Al Pacino movie Insomnia was filmed there. I'm the one racing back to shore before my nuts fall off. My friend Trinity out-weighed me by about 100 pounds, so he crawled up on the ice block as you can see and was fine! I thought my heart was going to stop! I got to shore and ran into the heated car! Good times!

#4 - That was a band I was in called Wicked Green. Just a bunch of crazy guys who could rip some shit up! I started on bass with them, and then became the lead guitar player after they found a bass player. The only live show I played with them was at a local fundraiser called Battle of the Bands. Being from Smithers, most of the bands that played before us were folk and rock. We were last up on the card. Let's just say our wild thrash music made all the hippies and elderly people leave the hall in a HURRY! But all the cool kids stuck around and moshed it up for an hour straight. The guy filming us was drunk and tripping over all our stuff on stage, I could hardly hear myself playing over Tyler's souped up amp, and stuff was getting broken because of the mosh pit. It was fun, but Wicked Green was never invited back!

#5- Here's some whack- In my late teens I hung out with a pot smoking crowd. They would always come to our house in the country, and we'd hotbox my 1979 Corolla that was parked in the bush. After an hour of that, we'd get creative, and stuff a bunch of hay down the back of our pants, and run out into the field to make the cows chase us. And they did! It was like being in Spain perhaps when they 'run the bulls'. Of course, being high intensified the feeling, and those were good times, good times!