Share All sharing options for: 10 REASONS WHY THE PANTHERS WILL MAKE THE PLAYOFFS IN 06/07 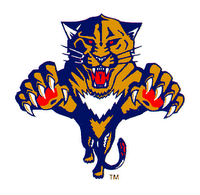 OK, this is the last time I talk about Florida. I was just checking some stats and had to run my mouth again!

1. Gary Roberts had a 69% points per game average last season, which is the most he has had in 6 years. The last time he did that was in '99-00 with the Hurricanes.

2. Joe Nieuwendyk had an 86% points per game average last season, the most he has had since the 97/98 season with the Dallas Stars.

3. Nathan Horton jumped from a 40% PPG average in his rookie year to a 66% PPG average last season as a sophmore. He will only get better this year.

6. Jay Bouwmeester had a career year last season. He keeps getting better and better.

7. Olli Jokinen had 89 points in 82 games last season. A career year. He has arrived.

9. Tampa and Atlanta are weakening.

10 reasons why Florida may NOT make the playoffs:

1. Roberts gets hurt all season long, returns to T.O. on a stretcher to be with Mats and his daughter (fake injury, or bottle thrown by fan!)
2. Nieuwendyk thinks he sees Marchment coming at him, flees off the ice and never returns!
3. Jacques Martin (with his french accent) sends Rotislav Olesz to the minors because he gives up trying to pronounce his name!
4. Nathan Horton finds out he's actually related to Tim Horton, and gets promoted at a new Tim Horton's in Florida-beach side, where all the girls are!
5. NYR Dominic Moore-brother of Steve-tries to suckerpunch Bert-misses-falls on his head-and Bert gets blamed for it and suspended for the season.
6. Bert and Eddie then get drunk and go shopping at Moore's-a fine clothing store for men-looking for Steve Moore. They can't find him, chase out all the employees, torch the place, and do a tribal dance around the fire. They both get long term jail sentences.
7. Bertuzzi complains that Roberts isn't as good of a friend as Naslund is because Roberts hits back when Bert makes fun of him-Bert gets depressed and goes into a slump, making drop passes that constantly end up on the other team's stick.
8. Hurricane strikes-mass evacuation-and the Panthers play the rest of their home games in Vancouver-where the home team will NOT win this year.
9. Keenan shoots Belfour
10. Belfour shoots Keenan

OK now I'm done! It's amazing what a little Captain Morgan's will do to ya! Next I'll tackle Boston!