Share All sharing options for: SHORTEST GM TERM EVER? 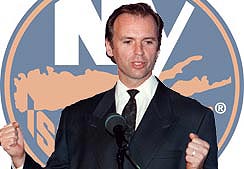 New Islander's GM Neil Smith has been fired ALREADY
for undisclosed reasons. A statement from the Islanders
is expected sometime today, and the reasons for the firing will
be revealed.
Smith was hired as the GM in mid-June. He made a few
significant signings this summer, acquiring Brendan Witt,
Mike Sillinger, Chris Simon, and Tom Poti.
So why the firing? Did he bang the boss' wife?
Did he fail to make a blockbuster trade or huge free
agent signing? I don't want to find out that Ted Nolan
had something to do with this!
Does anyone else wonder if Pat Quinn could be next in
line? Or will Mike Milbury take back what was his?