SALMON RIVER GETS THE HABS AND SENS ON SEPT. 25

Share All sharing options for: SALMON RIVER GETS THE HABS AND SENS ON SEPT. 25 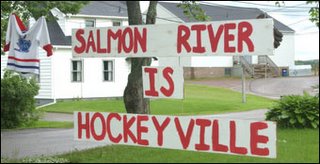 Salmon River, Nova Scotia will witness an NHL exhibition game between the Canadiens and Senators on September 25, as a result of winning the Kraft Hockeyville competition. Realizing this, I now feel the sting of our loss once again, as we (Smithers) finished in the top 5. Imagine a Canucks / Flames game at the Smithers Civic Center.....
Nevertheless, I'll once again congratulate Smithers Hockeyville Organizer Matt Davey and Co. for the job they did. And way to go, Salmon River, you guys will have a hell of a time! As a sidenote, aren't most maritime province hockey fans Canadiens and Leaf fans? Every easterner I've met has been a fan of either the Habs or the Leafs (and Captain Morgan's Spiced Rum! Heheh) I wonder how many Senators fans are out there.
I hope the game will be televised on September 25th, as it will be a treat to watch. I'm just not looking forward to feeling the pain of losing once again. 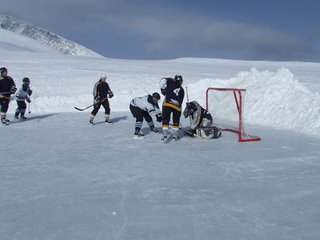 Despite all this we can also be proud of the 'highest altitude women's hockey game..EVER! (as seen to the left, and here. That was one sweet idea! The women played at about 5500 feet above sea level, just above our ski hill, and at the same location that Eight Below was filmed.