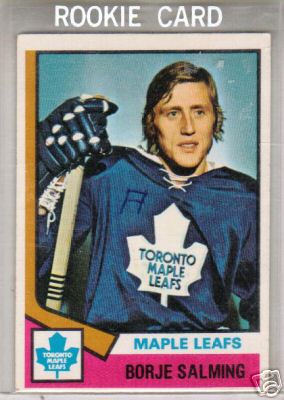 This week it is the Great and Mighty Borje Salming.
Damn, I used to have this card! Salming was my first hockey hero. I can remember watching Hockey Night in Canada as a kid in the late 70's, and seeing Salming break out of his zone with that burst of speed. He was a great powerplay quarterback, and made the great breakout passes out of his zone as well.

Salming was one of the first Swedes to play in the NHL. He was signed as a free agent in 1973 (out of Sweden. He is the first Swede to be inducted into the Hall of Fame..(like that Temujin??)

In 1989 he was acquired by the Red Wings as a free agent, but only played 49 games with the Wings before retiring from the NHL. He then played three more years in Sweden with AIK Solna.

Funny Facts: *Salming has his own line of underwear called Salming Underwear! Oh Geeza!
*Apparently, Salming was also suspended during the 86/87 season for admitting he had tried cocaine 6 years earlier at a party. Borje.....deny deny deny!!!!