Share All sharing options for: PECA TO WEAR LEAF BLUE AND WHITE? 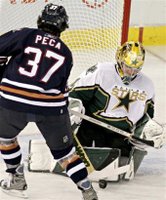 >It appears that the Leafs and Michael Peca are
close to getting a deal done. It was initially speculated
when free agency market opened that Peca wanted
to play 'closer to home.'
I would assume he will sign for a bit less than last
year, given the Leaf's salary cap position. Incentives will
probably be added to the deal.
I have always been a huge Peca fan, so this potential
signing is getting me excited. However, Peca's inconsistent
play in recent years prevents me from breaking out the
Spiced Rum and Coke. More to come...