NO SUPPORT FOR OVECHKIN

Share All sharing options for: NO SUPPORT FOR OVECHKIN 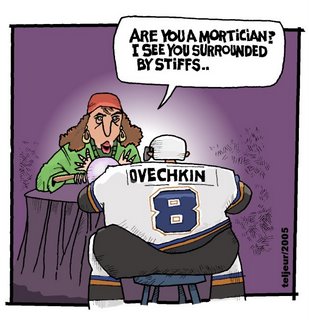 Here is a comic from CBC's The Instigator that paints a true picture. As it stands, the only acquisitions made by GM George McPhee so far this offseason are D Brian Pothier, F Richard Zednik, and F Donald Brashear, and F Alexander Semin from Russia.
These are minor upgrades, unless Brian Pothier and Alex Semin's upsides exceed expectation. But Semin is a longshot. Zednik will help a fair bit if he clicks with Ovechkin.
Below is the commitments that the Capitals have so far. Matt Pettinger is the only player unsigned. (TSN) 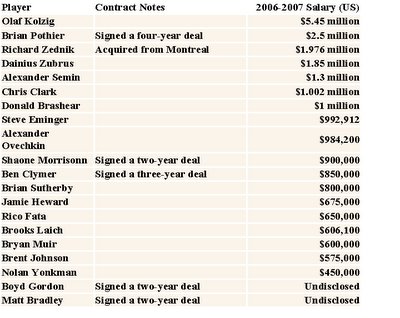 This adds up to about $23.14 million US. The Capitals are still paying about $4 million of Jagr's salary as well, since they signed him for too much and too long in the old NHL pre-cap system.
So make that total $27.14 million. Add about $2 million onto Ovechkin's total because he reached all of his incentives last year, and the total is about $29 million. (damn confusing) There is still alot of room to play here.
So why the delay by GM George McPhee to sign a pricier- higher talent? Ovechkin's contract will expire in 2008 I believe. So he'll need to have $8 million plus to resign Alex, for one.
I think McPhee has a lot of patience with his young players as well. But do you see a lot of upside to this roster? I don't. Not much beyond D Steve Emminger.
I think they should trade for Scott Gomez within the next couple of months. There is not one good center on the team to play with Alex. (No, Halpern and Zubrus are NOT good and should be used further down the depth chart). Gomez would fit in the cap structure, and thrive with Ovechkin. If not Gomez, then any center of Gomez' calibre. Devil's GM Lou Lamoriello must lick his lips at he sight of a sucky team's high draft picks. It makes sense...
The Capitals must be somewhat suffering financially at this point. From what I gather, they averaged about 13,905 people in attendance last season, and the arena holds 19,700. This would be about 28th in the league. The Capital's record was 29 - 42 - 12 for 70 points, which was 26th in the league.
People will pay to see Ovechkin, but more people will pay to see a winning team, especially in a RedSkins/Wizards climate.
So DO IT, McPhee! Not only because it would make me a prophet, but also for the fans- as one Capitals fan said today "Show me Gomez, and I'll buy season tickets tomorrow."
I agree, don't leave Ovechkin with a bunch of stiffs.

**UPDATE- The Devils have accepted Gomez' deal and are now over the cap.**