NILS EKMAN TRADED TO THE PENGUINS

Share All sharing options for: NILS EKMAN TRADED TO THE PENGUINS 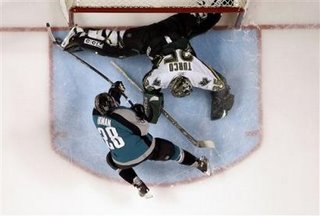 Just reported on TSN. Ekman and prospect goalie Patrick Ehelechner were traded to the Pens in exhange for Pittsburgh's 2nd round pick in the 2007 draft. Ekman had a career year last season netting 21 goals and 36 assists for57 points. Now he'll probably have Sydney Crosby as his centerman. This is probably a bit of a salary dump for the Sharks, who still have to sign Mark Bell, Christian Erhoff, and Mark Smith. The Sharks had also signed Curtis Brown in the offseason.