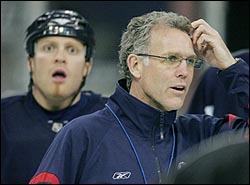 There have been a few signings today by teams keeping their restricted free agents and avoiding arbitration. But nothing of any significance.
In Edmonton, the press conference for the renewing of Coach Craig MacTavish's contract was held at the airport. MacT joked that it was held there so they could prevent any more Oiler players from leaving town! He has signed a 4-year deal.
Jarret Stoll signed a 2 -year 4.4 million deal.
The Sabres signed Henrik Tallinder.
The Penguins signed Colby Armstrong to a $816,953 US, one-year deal.
Jordin TooToo signed a 2-year 1.2 million US deal.

The real buzz in my opinion is about Scott Gomez heading into arbitration. Gomez had 84 points in 82 games last season, and will be getting a hefty raise. He should earn between 4 -5 million. This will force Devils' GM Lou Lamoriello to make a substantial trade to get back under the salary cap. So be the GM...who would you trade and get in return to move back under the 44 million cap? It doesn't necessarily have to be Gomez. Also, register your vote on the sidebar!
A rumor in an Arizona newspapers is that the Coyotes will be in the hunt for Gomez. Apparently they are offering Mike Comrie and Oleg Saprykin.

Finally, Alanah Downie from Vancouver Canucks Op Ed is participating in the Blogathon 2006 on July 29. See the link for the details on sponsoring her, who the proceeds go to, or to keep her company during her 24-hour consecutive blogging next Saturday. She will need it!