IS SYKORA HEADING TO EDMONTON?

Share All sharing options for: IS SYKORA HEADING TO EDMONTON? 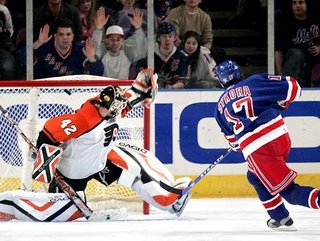 There are various reports that UFA Petr Sykora may be heading north. There are rumors that he could sign a 1-year $2.85 million deal as early as today.
I say they can have him!! Sykora has been awfully streaky in recent years. He had 51 points in 74 games last year. His best seasons were with the Devils on the famed Arnott/Elias Sykora line that won the Cup in 2000. That is still one of my favorite lines of all time.
However, it would be interesting to see Sykora's work ethic in Edmonton. MacT wouldn't ever let him off the hook for slacking, and maybe Sykora could revive his career with the Oils.
Either way, it is SPECULATION at this point. I'm sure Oiler fans hope it becomes a reality.