Share All sharing options for: HASEK RETURNING TO DETROIT 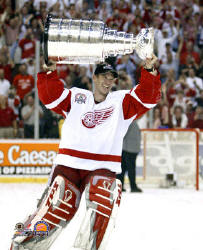 There is reports out of Detroit that Dominic Hasek will sign with the Red Wings for one more year. The Wings had no plans to stick with Manny Legace or Chris Osgood as their number one goalies this year, and signing a bigger name goalie was imminent.
The question now is if Hasek's groin will be able to withstand another season. Last season Hasek had great numbers in Ottawa until he injured his groin at the Turin Olympics. He then missed the rest of the season and playoffs.
It is an interesting scenario. For one, Wings fans were awfully nervous about the chance of Belfour coming to Motown, but can they be any more or less excited about Hasek?
Another issue is: Why the hell don't they like Manny Legace? Legace was 37 - 8 - 3 last season with a 2.19 GAA. Strange.
Hasek's deal will include incentives. So maybe that will heal his groin a little quicker. Either way, not even Hasek can save the potential downward spiral in the standings for the Wings, IMO.
Terms of the deal were not announced at this time.
Thanks to Christy for her prompt post at Behind the Jersey.