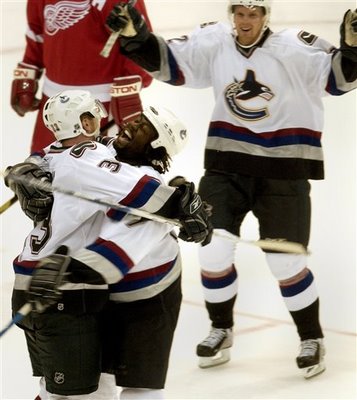 Look at the jubilation on Anson Carter's
face! Are Canuck fans ready to part with
him? The pain will almost equal the Oiler
fans' loss of Chris Pronger. It was a complete
treat to watch the Sedin/Carter line this
past year. I kept dooming Carter to fail in a
Canuck jersey, but he constantly proved me
wrong.
Alas, this is the result of the Luongo signing
by Dave Nonis. The Canucks are out of Salary
Cap space. But I just can't fault Nonis for that.


But will Carter ever have another great year
like this? Will he ever find this kind of chemistry
again? What team is willing to sign him for 3 million
at this stage of the off season? Especially
considering that the oft-moved Carter rarely
has a good season.
Can you imagine if Washington would sign him
to play alongside Alex the Great? THAT I'd like
to see...
Either way, so long, Black Knight!