Share All sharing options for: BUILDING THE OILER'S DYNASTY

The WHA had failed miserably, and the Edmonton Oilers merged into the NHL along with the Jets, Whalers, and Nordiques in 1979, and an expansion draft took place. NHL teams could draft the WHA players whose rights they held. Wayne Gretzky's case was an exception because nobody owned his rights. 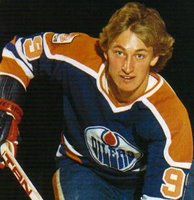 Somehow, Oilers GM Peter Pocklington managed to keep Gretzky in Edmonton as a 'priority selection', and it was agreed upon by the NHL. As a result the Oilers picked last in the 1979 Entry Draft in the first round.
To fill out the rest of their team in the expansion draft, the Oilers basically selected a bunch of 'nobody's', except for defenceman Lee Fogolin and goalie Eddie Mio.
But it was the 1979 Entry Draft that proved to be an exception.
The Oilers picked Kevin Lowe 21st overall, at the end of Round 1.
They then picked Mark Messier 48th overall, and Glenn Anderson 69th. These were genius picks. However, players like Ray Bourque, Mike Gartner, and Michel Goulet were selected earlier in Round 1 as well!
During the 1979 season, there was a lopsided trade between the Oilers and North Stars. Edmonton traded their 2nd round pick-Neal Broten, and their 3rd pick-Kevin Maxwell to Minnestoa for goon Dave Semenko. That trade was ass- backwards in hindsight, but at least Gretzky got his policeman! The Oils also acquired Charlie Huddy through free agency from the Sabres, and traded Ron Chipperfield to Quebec for goalie Ron Low. The Oilers finished the season with 70 points, and were decimated in the first round of the playoffs by the red-hot Flyers.
The 1980 entry draft saw more Oiler- drafting wizardry. They drafted Paul Coffey 6th, Jari Kurri 69th, and Andy Moog 132nd. Three more cornerstones to their franchise. The only trade they made in the 80/81 season was sending Pat Price to Pittsburgh for Pat Hughes, who would be an instrumental secondary scoring role player for the Oils over the next few years. The Oilers finished the season with 74 points, suprised the Canadiens in the first round 3 games to 0, and then were soundly defeated in the second round by the Islanders Dynasty.
In the 1981 draft the Oilers selected Grant Fuhr 8th overall, and Steve Smith 111th. Steve Smith would not be on the first Cup-winning team, but Grant Fuhr jumped into the lineup immediately and paid huge dividends. The Oilers made only one trade in the 81/82 season, getting reliable defenceman Don Jackson from Minnesota for Don Murdoch.
This Oiler team was maturing fast. Wayne Gretzky had a miraculous 92 goal 120 assist season and was shattering records left and right. They finished the season with 111 points, second only to the dominant Islanders, but once again fell early in the playoffs in Round 1 to the underdog Kings, who performed the 'Miracle on Manchester', squashing the cocky Oilers.
The 1982 draft was insignificant for the Oilers unless you count Jaroslav Pouzar 83rd overall as special. But they did trade Risto Siltanen and Brent Loney to Hartford for "The Rat" Kenny Linseman and Don Nauchbaur. They also traded Laurie Boschman to Winnipeg for a gutsy guy named Willy Lindstrom, and signed Doctor Randy Gregg as a free agent. They finished the season with 106 points, obliterated the Jets, Flames, and BlackHawks in the playoffs before the relentless Islanders beat them four straight in the finals. At this point, Oiler players still recall that finals loss teaching them a lesson on what it took to win.
The Oilers drafted 2 more beauties in the 1983 draft: Jeff BeukaBOOM at 19th, and Esa Tikkanen at 80th overall. This was the same year that Cam Neely was drafted 9th by the Canucks, and Claude Lemieux-26th by the Canadiens. Tiks and Boom would not be on the first Oiler Cup-winning roster, but would obviously be instrumenta further down the road. The Oilers sent Tom Roulston to the Pens for tough guy Kevin McClelland to get some more size for the playoffs, and he would pay off with a stellar playoff run. The Oilers finished the season with 119 points-well ahead of everyone else. Gretzky and Coffey led the league in scoring. Edmonton blew by the Jets 3-0 in round 1, squeezed by Calgary in 7 in Round 2, pumelled the North Stars 4-straight in the semis, and finally defeated the Islanders in 5 for the Stanley Cup. The Islanders Dynasty had finally come to an end.

The Oilers would win 5 Stanley Cups in the 80's to create their own Dynasty. Ironically the only good draft pick they made over the next 6 years was Kelly Buchberger, selected 188th in the 1985 draft. But they didn't need good picks anymore. The core of their team was one of the best in history. The huge majority of that Superstar core was primarily from their drafting prowess. This is something that the Islanders had done before them. But I'll get into that some other day.