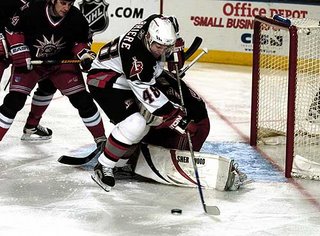 The Sabres' rising star has just been awarded a $5 million US 1-year contract through arbitration. This coming off the heels of a 58 point season in only 48 games. TSN reports that the contracts of players like Martin Havlat and Alex Tanguay were used as templates for the negotiations.
This is a huge raise for Briere. But apparently Buffalo management is not happy with this. There is speculation that Briere could still be traded within the next 48 hours. (Sabres' GM Darcy Regier has only 48 hours to accept or reject this settlement.) If rejected, Briere will become an unrestricted free agent. So the Sabres need to move Briere before that happens, if Briere is out of their plans. TSN reports that Montreal, Altlanta, and Los Angeles are especially in the hunt for Briere right now.
Speaking of Montreal, the Canadiens have signed Michael Ryder to a 1-year 2.2 million deal today. The Habs have all their player under contract now...lucky b*****ds!!