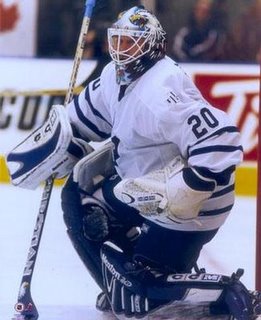 The 41 - year old has signed with the Panthers for 1 year, at $750,000 plus incentives.
Reports say he will split goaltending duties with Alex Auld this season. It seemed unusual that the talent-ridden Panthers would rely solely on an un-proven Auld in the first place. I figure Eddie will take the #1 position by late October.
This is a smart move by Keenan regardless of what Belfour-haters say. Belfour has constantly returned from back problems and proven to be a good starting goalie. At this point I don't believe his age is of too much significance.
This re-unites Eddie with Captain Hook Keenan. Their relationship in the past as members of the Black Hawks was rocky,
but this time around Keenan is GM and Jacques Martin is the coach.
Belfour is second on the all time wins list by a goalie, and will probably only get close to first place, held by Patrick Roy.
Wow, I'm going to jump on the Florida badwagon this year, now that they have two of my faves in Gary Roberts and Belfour.