This past Monday, the Canucks signed 4 prospects that could possibly crack their lineup this season.

Upon reviewing their profiles, I realized that a few of them may not be so bad at all. 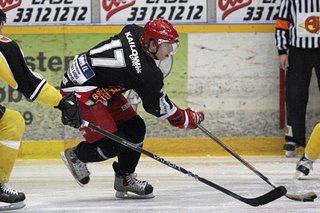 Pictured above is winger Jannik Hansen. Born in Herlev, Denmark, Hansen played on the under-18 Danish National Team twice. He is 20 years old, 6 feet tall, and weighs 190 pounds. Ok, so you figure he's Danish, so he can't play hockey, right? Last season he played for the Portland Winter Hawks (WHL) and recorded 64 points in 64 regular season games. He then achieved 13 points in 12 playoff games.
The scouting report on Hansen is that he has great speed, good hands, and a good wristshot. The knock on him is his size and lack of physicality. Look for Hansen to have a good training camp and possibly crack the Canuck's lineup occasionally this year.
Vancouver selected Hansen 287th overall in 2004. 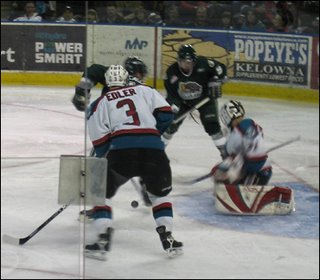 The second prospect is defenceman Alexander Edler. He is 20 years old, was born in Ostersund, Sweden, is 6 foot 3 inches, and weighs 212 pounds.
Edler had 53 points in 62 games and was a +21 with the Kelowna Rockets last year. He had 8 points in 12 playoff games. He had 23 points in 33 games playing with MoDo Sweden in 04/05.
Canucks scout Thomas Gradin scouted a virtually unknown Edler. Dave Nonis had to swap picks to pick him ahead of Detroit, who wanted him. He was drafted 91st overall in 2004.
Reports say Edler is good at making the first pass out of the zone, and is gifted offensively. Knocks on him are his defensive play and his lack of using his size. (Malik anyone?? ha!)
Edler may impress at camp this fall, but probably will not get a shot this year, due to the Canuck's current depth on D. 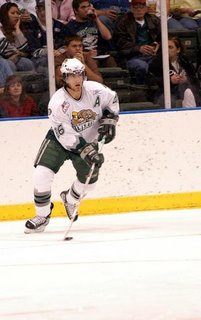 The third prospect is defenceman Shaun Heshka. Born in Melville, Saskatchewan, Heshka is 6 feet 1 inch, and weighs 190 pounds. He is 20 years old.
Heshka has offencive numbers that are impressive.. His 59 points last season withthe Everett Silvertips was second on his team and second among WHL defenceman. He is assistant captain of the Silvertips. He was a second team allstar in the WHL western conference last season.
I read about someSilvertip fans knocking Heshka for his slow speed and mental lapses. Either way, we'll find out how he plays with the Moose this season.