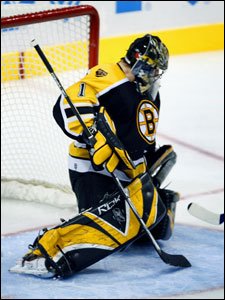 I've read about a lot of Leaf fans who are excited about the Leafs' offseason signing of G Andrew Raycroft. But I have been feeling so cautious and unsure of it since JFJ announced it. This is because in a sickening way, Raycroft reminds me of former Capitals / Bruins goaltender Jim Carey. Let me explain WHY I draw these comparisons...

Andrew Raycroft won the Calder Trophy as the best rookie in 2004. Jim Carey won the Vezina Trophy as a rookie in 1996. There has not been ONE GOALIE in the past 40 years-plus who has floundered the year after winning one of those 2 awards as a rookie except Raycroft and Carey. (Jose Theodore is a debatable possibility.) 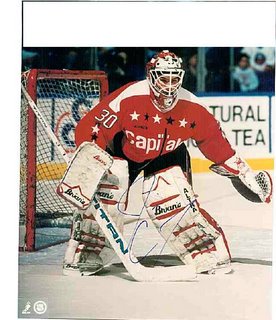 **Both goaltenders were traded after (or shortly before) their 2nd year had expired after winning those awards. Both with high hopes with their new teams.

***Jim Carrey's play was slowly declining in 1996-97. In March he was traded with Jason Allison, Anson Carter, and a 3rd round pick to Boston for Adam Oates, Rick Tocchet, and Bill Ranford. Once 'The Net Detective' arrived in Boston, his play deteriorated immediately, and his NHL career ended shortly afterward.

So what will be the story of Andrew Raycroft? The Leafs gave up a great goaltending prospect in Tuuka Rask for him. The fate of the Leafs will rest on his shoulders. JFJ is banking on it. He is expecting a full recovery of Raycroft's play and psyche.
I'm hesitant because history is not on Raycroft's side on this matter, and this could be the first year the Leafs don't have a bonafide number one goalie since Grant Fuhr played for us in the early 90's! Are my comparisons far-fetched? Am I wrong? This concept is a longshot possibility. We shall see in October... and as Han Solo once said, "I got a bad feeling about this!"